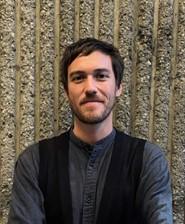 Byron Peters is an artist, writer, and educator based in Vancouver, unceded Coast Salish Territories. His interdisciplinary and often collaborative practice takes the forms of emerging technologies, sculpture, text, drawing, sound installation, and film. Currently, his work engages with community television and the political histories of science and mathematics.

His artworks and films have been widely presented nationally and internationally. He holds a BFA from the University of British Columbia and a MFA from California College of the Arts, San Francisco.

FINA 1135: Introduction to Digital Media I