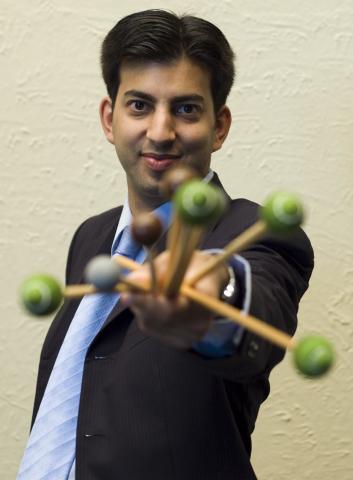 Daniel Tones is an award-winning percussionist committed to fostering creative development in young artists. He has given concerts across Canada, the United States, Asia, and the United Kingdom, performed with internationally recognized musicians Bob Becker, Aiyun Huang, Morris Palter, and Steve Schick, and been broadcast nationally on radio and television. He studied with Salvador Ferreras, Russell Hartenberger, and John Rudolph, and was the first person to receive a doctorate in percussion performance from a Canadian university.

Daniel is widely recognized for his work as a contemporary percussionist in the fields of solo and chamber-ensemble performance. Recent highlights include solo tours in Canada, the United Kingdom, and the United States, performances at Birmingham’s BEAST FEaST, the Vancouver New Music Festival, the Ojai Festival, and the Banff Summer Arts Festival, recitals in major international venues such as the Barbican’s Milton Court Concert Hall in London, England, and guest appearances with the TorQ percussion quartet.

Global drumming first drew Daniel to percussion. He studied frame drumming, West African drumming and dance, Balinese gamelan, and Cuban percussion with master musicians, and performed professionally in salsa ensembles for over 10 years. As a graduate student he developed a passion for orchestral music, and performed for ten seasons as the Principal Percussionist of the Kamloops Symphony Orchestra. He has also performed with the Toronto, Vancouver, and Victoria symphonies, the CBC Vancouver Radio Orchestra, and the Vancouver Opera.

Daniel is a successful arts administrator dedicated to the development of the performing arts in Canada and abroad. He serves on the Board of Directors for the National Youth Orchestra of Canada and is the Chair of the Percussive Arts Society’s International Committee. In addition, as the Director of Fringe Percussion he has received numerous grants from the BC Arts Council and the Canada Council for the Arts.

His most significant contributions to the performing arts locally and regionally came through his work as the Music Program Coordinator for the District of West Vancouver. In this role he designed and implemented a vibrant array of programs including private and group music lessons, summer camps, drama, and musical theatre classes. Under his leadership the number of students enrolled in West Vancouver’s community-based performing arts programs grew from 70 to over 250, and his instructional team expanded from three to 18.

Daniel teaches at Kwantlen Polytechnic University and leads Vancouver’s Contemporary Percussion Intensive. He is a Yamaha artist-educator and Sabian endorser, and provides workshops regularly to students throughout Metro Vancouver. In recent years was the Percussion Coach for the Canadian Wind Orchestra, the National Youth Band of Canada, and the Prairie Music Residency.