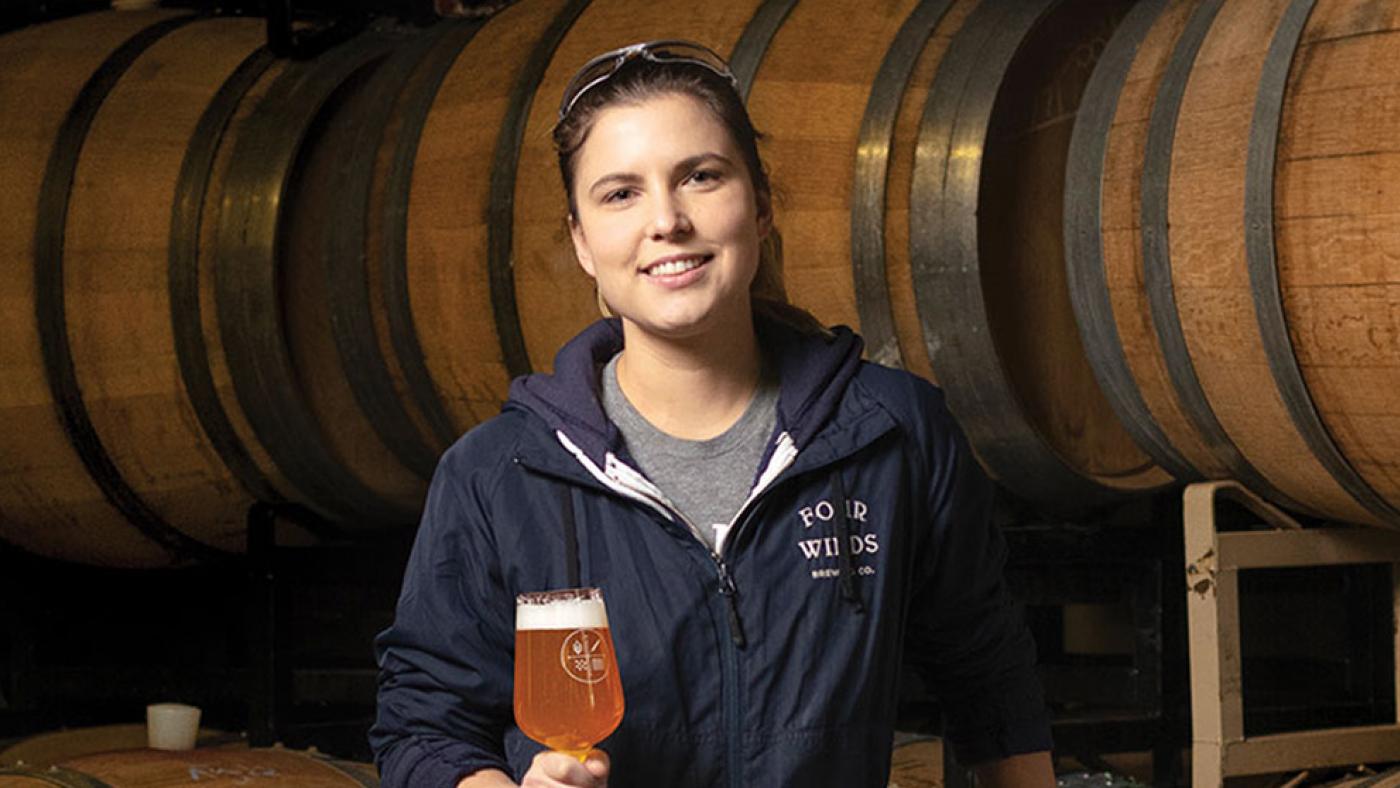 Note: This interview was done when Ashley was Head Brewer at Big Ridge Brewing. She is currently the Quality Control Manager at one of BC's top breweries, Four Winds Brewing in Delta, BC. Read a newer interview with Ashley from the KPU Alumni magazine at kpu.ca/alumni/ashley-brooks.

Why did you decide to enrol in the KPU Brewing & Brewery Operations Diploma?

AB: I’d been interested in getting into brewing for a while and when I saw the KPU Brewing program, I thought it was a great opportunity to fast-track my way to a head position. So, I went to the info session and it all started from there.

What are the most important things you’ve learned from the program that have helped you in your career?

AB: Well, the courses are very in-depth and they cover all aspects, from brewing in general to the science behind it and how to brew good beer. All of that has been extremely beneficial and definitely helped me get the head brewer position at Big Ridge when I first graduated. I’m not in a production-style brewery, so packaging kind of comes second, however, the business side of the program was really important, too. For me, it’s really about the brewing though, like what ingredients you use and where to order them. And quality control is also critical because you always want to have fresh product out there.

Can you give us a walkthrough of a typical workday at the brewery?

AB: On a typical brew day, I’ll usually start my boilers to heat up my water to the proper temperature, then I’ll mill my grain before mashing in, which is using the mash tun to steep the grain and extract the sugars. Then we lauter it into the kettle, and during that I’ll sparge it as well, which is basically rinsing the grain with more water to get us to the volume we want in the kettle. It also helps get all of those sugars out of there which is good for efficiency.

Then, we’ll boil that up and add some hops — I usually boil for about an hour and a half which is fairly typical although some people will do an hour. Then I’ll do a whirlpool and then a whirlpool rest before it goes through the heat exchanger and then transferred to a fermenter. That’s basically a decent run-through of my day, plus doing lots of inventory!

Why should people seek a career in the craft brewing industry?

AB: Because craft beer is awesome!

It’s really starting to boom, as you can see. There are craft breweries opening up everywhere, especially in the Lower Mainland. It’s a great spot to be in when you know your stuff, and the craft brewing community is just super welcoming and great to be a part of.

Plus, it’s a really fun job. Besides the actual brewing, there are also a lot of beer events to go to where you mingle and talk beer. It's an opportunity to talk with other brewers, learn more about beer, and how to be come a better brewer in general. So yeah, it’s a pretty fantastic industry!

What kind of responses did you get from prospective employers when they learned that you went through the KPU Brewing Program?

AB: I got my first job because my employer was looking specifically for a brewing student — they wanted to hire somebody that was just starting out but who was serious about brewing. Being a KPU Brewing student definitely helped me get jobs in the industry, especially the position of head brewer at Big Ridge Brewing.

What are the more creative aspects of your job?

AB: Coming up with recipes...recipe development is a huge one. I could go on and on about the research. There are tons of books, as well as everything on the internet, to read about different beer styles. So, whether you want to do something traditional or go outside the box, craft brewing is absolutely creative. Brewing is definitely a balance between science and art.

What does craft brewing mean to you?

AB: To me, I think it’s artisanal. I think of people putting a creative, good-quality product out there, and it always reminds me of small communities coming together. It’s quite an awesome industry!

Note: Ashley has been collecting some impressive awards since graduating in Spring 2016, winning gold in the British Pale Ale category for her Big Ridge Clover IPA at the 2016 BC Beer Awards; and also winning at the Vancouver International Craft Beer Awards for her Big Ridge 152 Lager.

Some media articles on Ashley:

Join us for a Brewing Open House or Information Session! For dates and registration, visit kpu.ca/brew/info-session.