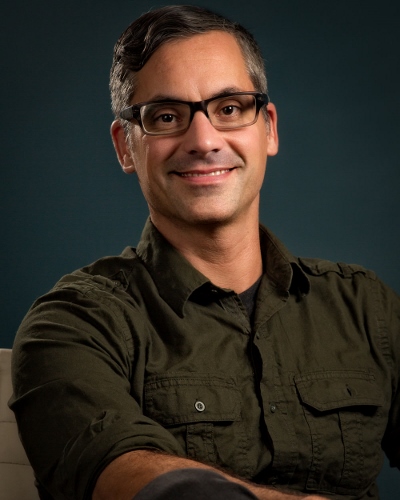 Jef Gibbons attended Kwantlen until 1996 and went on to study at University of Winnipeg and Trinity, as well as an audio engineering school. After school, Jef went on to teach music lessons to many local children.   He also became a software evangelist for numerous music software companies including Cubase, Logic, Reason, and Native Instruments.

Jef began his teaching career at Trinity Western, teaching the Digital Recording courses, as well as lessons in composition.  He has now been teaching at TWU for 16 years. He has a studio and has been involved in many forms of audio production.   Jef began composing music for films in 2005 and went on to make soundtracks for films, video games, and apps.

Jef was hired to score music for a big ESL curriculum put out by the Japanese company called Grapeseed.  This project involved hundreds of original pieces of music set to audio books and video animations/ short films.  The curriculum is spreading all over the world and is quickly becoming one of the biggest ESL curriculums in the world.

5 years ago, he and his wife started Gibbons Creative.  Jef turned his attention to video and photography in addition to music.  They now offer complete video production and have been making videos of all sorts for both the Township of Langley and the Downtown Langley Business Association.  Recent video projects include work for Philips lighting, BD Diesel, Pitt Meadows School board, and Biopod.

Jef lives in Langley with his wife and their 5 children, and together they lead a very creative lifestyle.