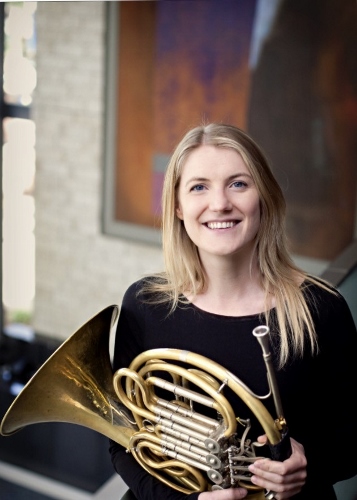 As a chamber musician Megan has recorded with notable national and international musicians, including All Star Brass Live from the 2014 Banff Summer Music Festival. She can also be heard live in concert with the Bok Brass brass quintet. This ensemble presents regular concerts in Edmonton, performing at special events and convocations, as well as inspires the next generation of musicians with their educational shows in schools throughout Alberta. The Bok Brass are also notable for their performances during both indoor and outdoor festivities, that latter being a daring feat for musicians in Edmonton’s winters!

In the summer months, Megan has participated in several prestigious music programs. These include a continuing engagement with the Colorado Music Festival, and several seasons with both the Aspen Music Festival and Brott Music Festival (Hamilton, Ontario). In addition to performing at these festivals, Megan spends her summer training for her newest hobby, triathlons.

Ms. Evans obtained her Bachelor’s and Master’s of Music from the Schulich School of Music at McGill University, where she studied with Denys Derome (Associate Principal Horn of l’OSM), and John Zirbel (Principal Horn of l’OSM). Her music studies began with a two-year diploma program at Kwantlen University in Langley B.C. It was here, under the guidance of horn player and conductor Wayne Jeffrey, that her love of music was nurtured and given the foundation to grow into a rewarding career. As a teacher herself, Megan currently maintains an active studio of students in both French Horn and Trumpet.