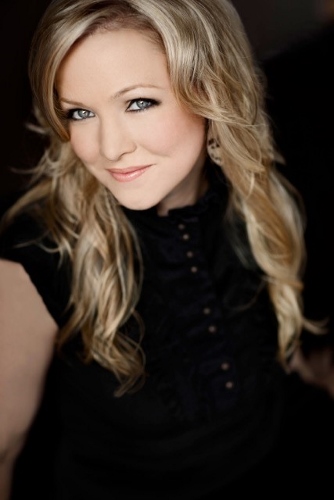 Soprano, Melanie Krueger has been hailed by La Scena Musicale Magazine as having “a voice that simply soars over the orchestra”. She has appeared in concert and opera stages throughout Canada and Europe and has been highlighted as a “show stopper” by the Vancouver Sun. Recognized for her expressive, lyric tone, and thrilling high notes, Canadian soprano Melanie Krueger embraces an extraordinarily wide range of repertoire. Professional operatic roles include the leading role of Eliza, in Nico Muhly’s Dark Sisters, Miss Wordsworth in Brittain’s Albert Herring, the Celestial Voice in Verdi’s Don Carlo as well as her debut role of Anina in Verdi’s La Traviata, all performed with the Vancouver Opera. Other operatic highlights include the role of Lillian in the Banff Centre’s production of Lillian Alling, as well as the role of Musetta in Pucinni’s La Boheme with the Czech Opera.

This season, Melanie will be performing Handel’s Messiah as well as the Mater Glorioso from Mahler’s Eighth Symphony with the Vancouver Bach Choir and the West Coast Symphony Orchestra. Recitals include the Powell River Recital Series and an alumni concert at KPU.

Highlights of Melanie’s stage and concert career include the role of Sharon in The Art’s Club’s production of Terrance McNalley’s Masterclass. Viennese pops concerts have also been a staple of Melanie’s concert career. She has worked with some of Canada’s leading conductors and orchestras including Bramwel Tovey and the Vancouver Symphony, the Victoria Symphony, the Kitchener-Waterloo Symphony and the Newfoundland Symphony. Oratorio engagements include Handel’s Messiah, Mendelssohn’s Elijah, Bach’s B minor Mass, Mozart’s Requiem, Vivaldi’s Gloria, Bach’s St. Matthew Passion and St. John Passion.

Melanie holds a Master’s degree in voice performance from the University of British Columbia, a bachelor of music degree from Wilfrid Laurier University and a Bachelor of Education degree from Memorial University.