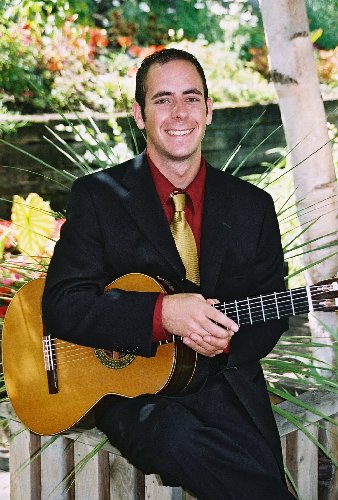 Classical guitarist Stephen Lochbaum began his musical studies with rock and roll and the blues when he was twelve years old.  Over the next five years he explored every genre that came his way: jazz, blues, heavy metal, folk, county and flamenco.  During this time he also played guitar and sang in a band.  His main teachers during this time were Larry Church, bassist for the band "Trooper", and later the very versatile and experienced John Gilliat.

Stephen went straight from high school to Kwantlen University College in Langley where he began studying classical guitar.  Here he studied with renowned Vancouver guitarist Dr. Bruce Clausen.  Stephen went on to earn his Bachelors and Masters degrees in Music at the University of Victoria, graduating on the Dean's list in the top 5% of the Fine Arts department.  Here he studied with Dr. Alexander Dunn, famed protégé of Pepe Romero.  Stephen has also had the opportunity to perform with Pepe and study with him in masterclasses.

He has also performed for many great guitarists and lautenists in masterclasses including: David Tannenbaum, Nigel North, John Schneiderman, Hopkinson Smith, Michael Nicolella, Jeffery McFadden, and Michael Partington.  During his stay at UVic Stephen maintained an active performing and competing schedule.  He performed Alexander Dunn's newly discovered Beethoven arrangements for two guitars in Festivals and recitals in Montreal, Calgary, Tofino, and Victoria.  He placed third in the 2005 Northwest Guitar Competition, and later won the 2005 Canadian National Festival classical guitar section.

Upon his Graduation in 2005, Stephen began teaching at the Victoria Conservatory of Music where he stayed for 2 years.  Soon after he played with the Vancouver Cantata Singers, which was to be his first radio broadcast on CBC radio 2.

In 2006, Stephen began playing classical concertos, pop arrangements, and original compositions in nightclub settings around Vancouver hoping to bring this music to new audiences.  In this year he also formed the prolific Corbett/Lochbaum duo, performing jazz, classical arrangements, and fusion experiments weekly.  The Duo quickly recorded an album which was broadcast on The NewVI (local Victoria television) and CBC radio 1 three weeks in a row.  In this time Stephen also made his first attempt at theatre, acting and playing the lute music of John Dowland and others.  The play, "Prior Engagement", was written by local playwright Meg Braem and staged by Out of the Box Productions.

During 2007/2008, Stephen devoted his time to tackling new repertoire, and teaching in the Lower Mainland.  Here he kept a studio of 40+ students as well as conducting beginner and intermediate guitar classes at UBC.

Currently, Stephen is preparing for international competition as well as maintaining a rigorous jazz and classical performance schedule