Faculty of Science and Horticulture 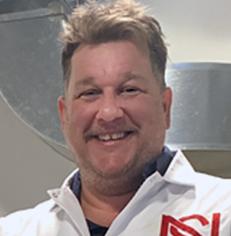 Michael started his post-secondary education at the University of British Columbia (UBC) and completed his studies back east, receiving his Bachelor of Science and masters at York University, then obtaining his PhD in physiology from the University of Toronto (UoT). After UofT, he began a fellowship in Seattle at the Pacific Northwest Research Institute. However, during his time in Toronto, while studying at the faculty of medicine, Michael was also working at Steam Whistle Brewing, which he helped launch in 2000.

It was at Steam Whistle where Michael developed his love of craft beer and learned the ins and outs of the brewing industry. Later on, he brought Steam Whistle to British Columbia (BC) as the provincial manager.

While successfully launching the Steam Whistle brand in BC, Michael started teaching at Capilano University in the sciences. He then became a permanent instructor at KPU where he teaches anatomy and physiology in the biology department and, more recently, became the chair of the brewing and brewery operations program.

He is inspired by teaching in general and loves how the advent of molecular biology has, in part, led to new and exciting beers through advances in engineering, testing new hop and yeast varieties, and quality control, and the increased interest in how beer is made.