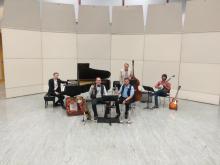 Keeping the musical traditions of the roaring twenties-and earlier-alive, Benny & the Good Men serves as a tribute to the traditional jazz of Chicago and New Orleans, and the later revival of the 1950's. Formed in the last two years under bandleader Ben MacRae, Benny & the Good Men is a throwback to the days of prohibition, and the hot jazz of the great bandleaders such as Sydney Bechet, Edmund Hall, Bix Beiderbeck and the great Benny Goodman. Although the Good Men play the standard hot jazz repertoire, the band also writes original tunes, specializes in obscure numbers, and is currently preparing for their first recording to be released by the summer of 2017. The band is composed of music KPU students Ben MacRae (reeds, washboard, vocals), Michael Radnai (cornet/trumpet), Robert Crews (guitar/banjo. vocals), Strauss Whiteside (piano, vocals) with the double-bass being played by a student of Jodi Proznick (KPU music faculty), Jonathan Baylis.

The Pentastic Hot Jazz Festival is an annual jazz festival held in Penticton, B.C. The Pentastic Hot Jazz Festival gathers some of North America's hottest jazz bands for a three-day festival celebrating the traditional pre-bigband and pre-bebop styles of jazz the 1930's, 20's and earlier. Past and present performers come from as far as N.Y.C, Dallas, Montreal and beyond, alongside feeaturing some of B.C's homegrown ensembles and artists, For more information on the festival and ticket-sales please consult http://pentasticjazz.com/