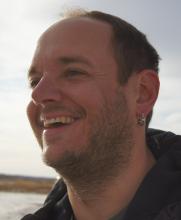 Melting glaciers are a bit of a specialty for Dr. Johannes Koch.

The Kwantlen Polytechnic University (KPU) geography instructor has been studying glacier history for nearly two decades because glaciers are sensitive indicators of climate change. Their study reveals past environmental change, which, in turn, may help us predict future effects of climate warming.

His research published last week in Science challenges the previously held notion that the Cordilleran Ice Sheet, which once covered much of Western Canada, disappeared steadily and uniformly towards the end the Ice Age. Instead, new data indicates that substantial areas were ice-free thousands of years prior to the end of the ice age.

“This has serious implications for climate dynamics and the timing of meltwater discharge to the Pacific and Arctic oceans at the end of the last Ice Age,” says Koch, who co-authored the paper.

Koch found evidence that there are vastly different responses to cooling periods during the decay of the Cordilleran Ice Sheet. His findings were based in the Squamish and Garibaldi Park area, where he conducted extensive research on glaciers.

“I consider getting your hands dirty the most important part of any education in geosciences,” laughs Koch, who teaches both entry- and upper-level geography courses at KPU’s Surrey campus.

Koch discovered evidence of glaciers of very different sizes that co-existed in adjacent valleys. For example, a large glacier was still occupying most of the Squamish River Valley and advanced well past Squamish into Howe Sound likely to the Porteau Cove area while just a few kilometres away, in Garibaldi Provincial Park, much of the alpine in the Helm Glacier area was ice-free. His findings were similar to that of over a dozen colleagues who were also studying moraines and glacial deposits throughout Western Canada and dipping into the Northwestern United States.

This discrepancy is something new, and we suspect probably has occurred for other ice sheets,” explains Koch. “Thus our understanding of ice sheet decay in general may have to be rethought. We cannot only focus on large glaciers, but need to take into account many glaciers of different sizes so we can try to accurately predict the behaviour of modern-day ice sheets.”

Photos of Dr. Johannes Koch in are available on Flickr.