Since 2007, KPU and the KPU Alumni Association has recognized many deserving KPU alumni through the Alumni Awards Program. The purpose of these awards is to recognize KPU Alumni who have enhanced the reputation of the university through their outstanding career, public service, community service, athletic, arts and culture, or academic achievements.

This year, the KPU Alumni Association conferred awards on two Kwantlen Polytechnic University alumni to honour their demonstrated excellence in their respective fields.

Kristan Ash came to KPU after obtaining a diploma in nursing in 1996 in Regina, Saskatchewan. She decided she could make a more significant contribution on the management side of healthcare and found KPU was the place that could help leverage her real-world knowledge with progressive and practical training in business principles. She obtained her BBA from Kwantlen in 2003 and launched her first business in the spring of 2004.

Her business was acquired and merged with another local home care company, Nurse Next Door and during her time with the organization, Ash launched and expanded the now very successful international franchise. Her career in the past 15 years includes entrepreneurial leadership and consulting roles within the healthcare field. She managed the development, construction and opening operations of Bear Creek Villa, a senior living facility in Surrey and her current role is as Executive Director of the Fraser Northwest Division of Family Practice.

“Kristan is kind, caring, compassionate person, who manages the big picture, but cares about details that matter in people’s lives. She listens to people and is dedicated to working on solutions,” says Jeff Norris, former Executive Director of the KPU Foundation and co-nominator.

Ash was named Vancouver’s Forty under 40 business leaders in 2014. She spent six years as a board member on KPU’s Board of Governor rising to the position of Chair, five years on the KPU senate representing KPU alumni issues and six years on the KPU Alumni Association board of directors including service as Chair.

“The word Kwantlen means ‘tireless runner’ and is reflected in KPU’s motto ‘through tireless effort, knowledge and understanding’. I feel Kristan is truly a tireless runner. With all her years of hard work and commitment to KPU, she is more than deserving of this award,” says co-nominator Shane King. 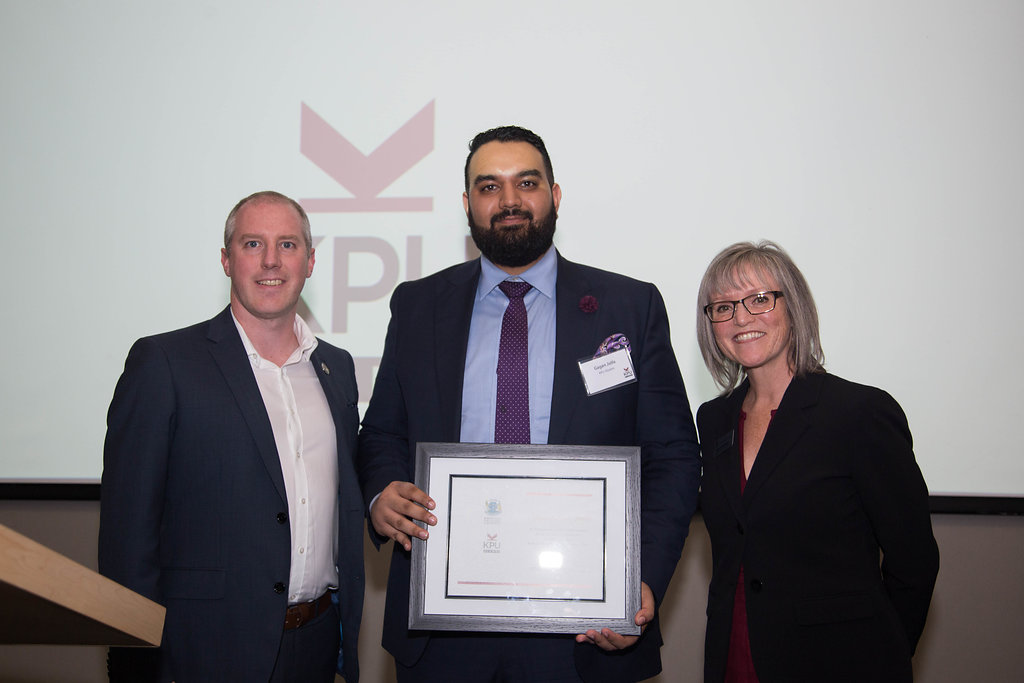 Gagan Jutla is a BBA graduate who completed five co-op terms in education, government and public practice during his time at KPU.

After graduating from KPU in 2015, Jutla proceeded to make a significant mark in the world as a graduate student in the Masters of Professional Accounting (MPAcc) program at the University of Saskatchewan, having since graduated with a CPA designation, and as a professional Manager with the top CPA firm, Grant Thornton in Vancouver.

Jutla was promoted to senior accountant within 8 months of starting with Grant Thornton. His exceptional work performance, technical knowledge, leadership qualities and the ability to build lasting relationships with clients paved the way for a few promotions, most recently to Manager within 2 years after starting, which is typically reserved for those with 3 years of experience as a senior accountant.

In terms of his community involvement, Jutla has continued to give back to KPU in countless ways. Most notably, he created an annual scholarship for KPU students, which recognizes their academic, community and campus involvement.  He also serves as a board member and treasurer of the Jericho Arts Centre, a not-for-profit theatre located in the west end of Vancouver.

For more information about the KPU Alumni Association, visit http://www.kpu.ca/alumni.