KPU students bring their skills to the City of Surrey hackathon

KPU students bring their skills to the City of Surrey hackathon 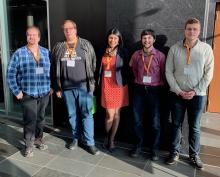 It’s like a marathon but instead of running, students from Kwantlen Polytechnic University (KPU) and other institutions had two hours to hack a server at the first annual CyberSCI Security Challenge at the City of Surrey.

Thirty-six students across nine teams – including three teams from KPU – competed to win a trophy and a full-time paid internship IT security internship at a local company.

“I was very apprehensive going in but it was a lot of fun,” says Ben Farrell, computer science student at KPU.

Once the teams sat down in front of their computers and received instructions, Tom Levasseur from CyberSCI gave the go-ahead to start. Teams were timed as they went through five levels gaining points for their teams. The levels included analysis, password cracking, network breach and more.

In 2017, 10 million Canadians had their personal and private information compromised due to cyber-attacks according to a Senate committee report. As technology evolves and hackers become savvier, the need to find qualified employees also increases. That’s a need events like this hackathon help to meet.

“It was a wonderful event, the students did great,” says Mandeep Pannu, computer science instructor at KPU. “It’s also a great learning event for us because it showed us the tools we need for the future.”

After a three-way tie for third place and some skill testing questions to break that tie, one of the KPU teams came in third place.

“The depth of the network they put together was great and they led us through the story to get to the end. It was a ton of fun,” says Anthony Harris, student at KPU.

Some hackathons can go on for hours, but this event gave students a two-hour window to complete the hack. The competition was followed by interviews with potential employers and a networking event.

Learn more about the computer science and information technology programs at KPU.