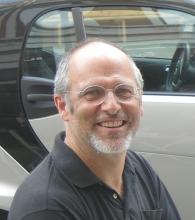 Wildfires, hotter temperatures, less rain than we’re used to on the West Coast, rising sea levels and the loss of arctic ice – climate change is real and with that comes fear. Can we stop it? Can we adapt? Despite the distress and dread that comes with climate change, one Kwantlen Polytechnic University instructor says there is some hope.

“We already have the technology necessary to address the problem and alleviate its worse consequences. It's simply a matter of using it, and the first step is awareness,” says Dr. Paul Richard, environmental protection and policy studies instructor at KPU.

Richard was visiting his wife’s hometown of Hamburg, Germany, when he came across a neighbourhood that he says made his jaw drop. He thought he had been transported into the future.

“It wasn’t only because of the windmills and solar panels that can be seen nearly everywhere. The area had been set aside to be developed as a challenge to architects and engineers to showcase their solutions.”

He says solar panels were next to an office tower that required next to no energy, and a few blocks away an old bunker had been retrofitted to provide energy storage for a whole neighbourhood.

“I thought, ‘why haven’t I heard of this before?’” Richard adds.

During his chat at Science World, Richard will discuss his research on Hamburg and other European cities that are taking steps to address climate change. He says he is convinced that the technology to combat climate change exists – we just have to use it.

“It may not be hope, exactly, but it is a roadmap to a way out and one I would like to share.”

Richard’s talk, Optimism in an Era of Climate Change, takes place at Science World on Wednesday, July 10 at 7 p.m. Register online to attend the talk.