Discovering language and farming from France to Mexico

Discovering language and farming from France to Mexico 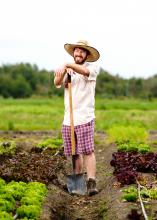 Through wwoofing Alex Stark had nurtured seeds of multilingualism and farming that bloomed at Kwantlen Polytechnic University.

What is wwoofing? WWOOF stands for World Wide Opportunities on Organic Farms. The concept allows people willing to do farm labour to gain work experience while getting free room and board in exchange.

“I was on a sheep farm for one month, then I worked on a goat farm for seven months and I was a goat herder.”

Stark’s background is Métis and French Canadian (maternal) and Polish-Jew and English (paternal). He learned French in a late immersion program from middle school to high school. After graduating high school, he decided to learn about where his food comes from. He met a farmer at a New Westminster market whose 12 children were mostly farmers. One of those children had a certified organic farm so Stark packed up and moved to Cawston, B.C., for a few months to learn more.

“Farming is exhausting. There are many beautiful things about farming but it is exhausting. After I was done, I still wanted to go back and do it again so I think that was a sign that I should continue,” he says after explaining how he had to plant field crops, work in the orchard and clean up after chickens, a job he didn’t necessarily enjoy.

With his language skills and new found love for farming, he journeyed to France and the dive into wwoofing began.

“I came back to Canada and thought well I understand some things but I don’t understand the science behind it, maybe I should look at what programs are out there.”

He wanted to focus on organic farming and that led him to KPU’s Sustainable Agriculture and Food Systems Program. While taking classes in the program, he learned of an internship opportunity in Cuba so he started taking Spanish classes at KPU.

Stark’s journey to Cuba involved learning and conversing in Spanish, working on an organic farm and working in plant health as a field technician in fields of cassava.

But his journey to broadening his language skills while also learning more about organic farming didn’t stop there. Stark joined a study in the Yucatan peninsula in Mexico studying how climate change is impacting the crops and the Maya people who live there. This meant learning another language – Maya.

He went back twice and the second time around, he decided to take a six-week Maya immersion program.

“Even though their lives are so engrossed in the Spanish world, it’s still a colonial language. Their language is Maya and they are proud of the language,” he says.

With a passion for both farming and languages, Stark graduated in June 2019 with a major in Sustainable Agriculture and Food Systems and a minor in Language.

And while he’s tackled farming in many different parts of the world including Canada, Stark’s next challenge is close to his heritage. He wants to learn the Michif, the language of Métis people.

“I’m in a good position to learn languages and then by learning it I can then teach it because that’s the duty that comes with it.”

Learn more about the Sustainable Agriculture and Food Systems program.