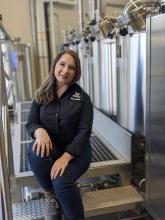 Nancy More is a legend in the brewing industry. She became the first female head brewmaster in North America at the Oland Brewery in Saint John, New Brunswick in 1985. After working for Labatt for more than 27 years she worked for several breweries in Europe and the United Kingdom. After returning to Canada she helped set up the curriculum at Kwantlen Polytechnic University’s Brewing and Brewery Operations Program, where she currently teaches part-time. In 2019 she was presented with the Legend Award at the BC Beer Awards (BCBA). Now, she also has an award named after her to help female or under-represented students in brewing at KPU.

“When people ask me what my biggest career achievement has been, I expect they’re usually waiting for an answer like building this brewery or leading that project or creating this technology or that, but really what I’m most proud of is the young people whose lives I’ve been privileged to impact and help them take their next steps in their brewing career,” says More.

The Nancy More award is presented by the BC Hospitality Foundation and the BC Craft Brewers Guild. Dana Harris, executive director of the BC Hospitality Foundation (BCHF), says the charity has given out more than $1.25 million to over 425 hospitality workers in a financial crisis due to a medical condition to themselves or a family member, along with scholarship recipients. The BCHF is the only charity of its kind in Canada, and this is their first brewery scholarship award.

“As an instructor at KPU I get the pleasure of working with Nancy More who is someone I have an immense amount of respect for,” says Ken Beattie, executive director of the BC Craft Brewers Guild and part of the advisory panel of the BC Hospitality Foundation.

Beattie explains that when they were looking for a name for this new award he found out that More was being recognized for the BCBA Legend Award, and an idea crept into his mind. They decided to name it the Nancy More Award.

“It aligns with Nancy’s principles and it’s our honour to launch it this year with our first recipient,” adds Beattie.

Emily Comeau is a 2nd-year student in KPU’s Brewing and Brewery Operations diploma program and the first recipient of the $1000 award.

“I would like to thank the Guild and the BC Hospitality Foundation. It’s really exciting and an honour to receive this award in Nancy More’s name; she’s a trailblazer, a brewing icon and an amazing person,” says Comeau. “I was drawn to this program because it combines science and creativity. As a plus, the program is a lot of fun. When I started, I didn’t know anything about brewing or how I’d be accepted by the guys in the program or if I’d be treated fairly as a woman. But everyone is welcome here and there’s a lot of support for each other as brewers, no matter what your gender is.”

“I’m excited to go forward in the industry,” Comeau continues. “I’m currently working at Mariner Brewing and they have been welcoming with open arms and I’ve learned so much from them. I’m excited to see more representation in the industry in general, and I look forward to being an ambassador and encouraging more women to get into brewing.”

More adds that Comeau has demonstrated a passion for beer and that’s what they want to see in the industry.

“The brewing industry still isn’t the welcoming place to everyone as we’d like it to be,” says More, “and I still hear young people talk about the same things that I experienced as a young woman right out of university going to work in this industry and different breweries. So, scholarships like these are going to help us change that world.”

“We really appreciate the tremendous support from the industry, especially during this time. This award is significant because it really champions and promotes gender equity and underrepresented members of the brewing community,” says Dr. Elizabeth Worobec, dean, Faculty of Science and Horticulture at KPU. “We’re also honoured to have Nancy as part of our brewing team and however we can honour her we will, and to be able to pass this on to our students through a scholarship makes it even more meaningful.”