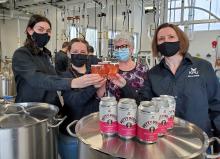 The beer honouring Worobec, a brewing education pioneer in B.C. who played a major role in creating the Brewing and Brewery Operations Diploma program in 2014, will be launched on International Women’s Day on Mar. 8.

“I’m very proud that I was able to lead the way in creating a university-level brewing diploma at KPU,” says Worobec. “We knew this was a unique program – the first and only one of its kind in B.C. – that would offer new career opportunities for students and help support the growth of the industry with skilled, trained graduates. 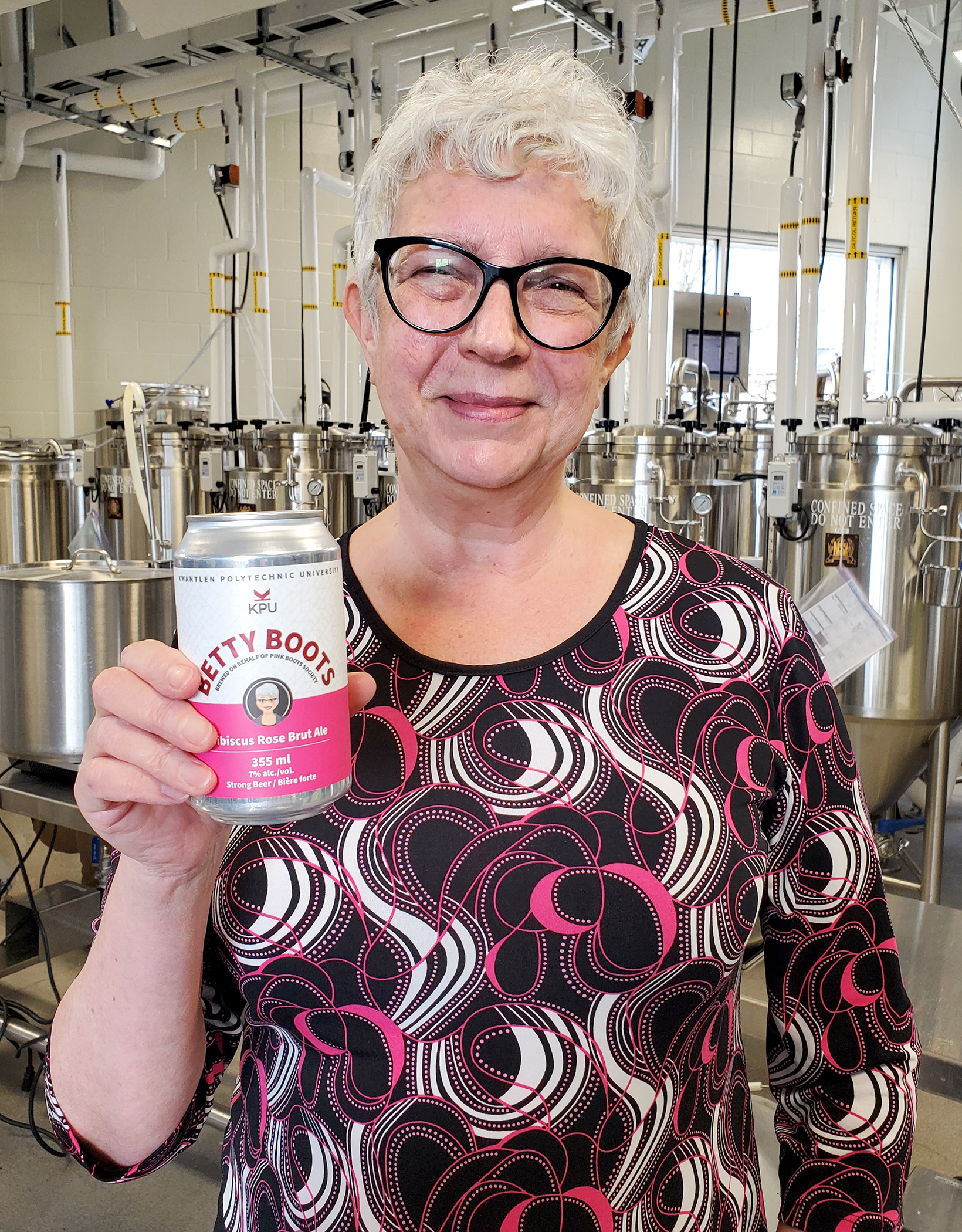 “It’s wonderful to see how it’s grown and continues to grow with the success of our students and alumni.”

It was an honour to have a special beer named after her, she added.

Betty Boots is brewed with a special ‘Pink Boots blend’ of hops from Yakima Chief Hops featuring aromas of citrus, berry, and tropical notes. Members of the Pink Boots Society, an international non-profit organization that supports female beer professionals, select the special blend each year. One of the hops, Idaho Gem, comes from a female-run hop farm in Idaho.

The Pink Boots collaboration brew beer is an innovative, sparkling, and dry hibiscus rose brut ale made with KPU honey, hibiscus flowers and rose petals to create a pink hue as a nod to the Pink Boots Society. A total of 12 women, including instructors and students, participated in making the brew at KPU’s teaching brewery at its Langley campus.

Brewing instructors Martina Solano Bielen and Emily Kokonas led a group of first and second-year female KPU brewing students in creating the beer along with legendary brewing instructor Nancy More, who was one of the first female brewmasters in North America. The team was also joined by alumna Ashley Brooks, quality control manager at Four Winds Brewing in Delta.

"It was really great to have the opportunity to collaborate with the women in our program for the Pink Boots brew day, and really meaningful to be able to develop a recipe for a woman who helped establish the KPU brewing program,” says second-year brewing student Lindsey Bartram.

The brewers carefully planned how each ingredient would reflect Worobec’s personality and her impact on the program.

“I'm glad we were able to create an innovative, strong beer that truly honours her legacy,” adds Bartram.

Betty Boots is a champagne-style ale that is strong and bubbly like its namesake. The beer is brewed with a pilsner malt for a light colour and subtle malt flavours, with honey added into the kettle for added dryness and honey aroma. High carbonation, as well as the addition of oak chips in the fermenter, give this beer a sparkling wine character.

“It’s very meaningful for our students and instructors to participate in the Pink Boots Collaboration Brew Day and feel connected to the larger community of women in brewing around the world,” says brewing instructor Martina Solano Bielen.

“Betty has been a strong figure in our university and is leaving behind some big ‘boots’ to fill!”

Betty Boots will be available by the glass at Farm Country Brewing in Langley, B.C., on Tuesday, Mar. 8 starting at 12 p.m. as part of the Langley Women of Craft Beer Tap Takeover in celebration of International Women’s Day. Proceeds from beer sales will go towards the Ishtar Women’s Resource Society.

On Friday, Mar. 11, Betty Boots will be available in six-packs of cans  at KPU’s Langley campus brewery from 1-6 p.m. A portion of the proceeds will be donated to the Pink Boots Canada chapter’s scholarship and education fund.

Learn more about the Brewing and Brewery Operations Diploma at KPU