Clarissa Martins is inspired by family members she has in the police and the military. So when she discovered police agencies only bought male or unisex armoured vests that weren’t as good at protecting women, Martins was determined to do something about it.

Making it the capstone project for the bachelor of product design she was studying at the Wilson School of Design at Kwantlen Polytechnic University, Martins put the skills she had learned in the program to use tackling the problem.

“These vests can be uncomfortable for women, as they are ill-fitted and that raises significant safety and health issues,” she says. “They can leave more extensive areas of the body unprotected, hindering movement, and putting strain on organs in the female body.”

Building on in-depth research of female anthropomorphic characteristics, Martins developed an optimized design that can be adapted across a highly detailed and customizable sizing chart. This ultimately resulted in designing a female-focused body armour called Active-Duty Impact Resistant Armour (ADIRA) that improves protection, mobility and comfort for female police officers.

“The name ADIRA means strong, noble, and powerful. Which I think is suitable for describing the attributes of female officers, as well as allows them to accomplish these traits while wearing my garment.”

Considering design elements from nature was a key part of Martins’ process, which resulted in computer-simulations of ADIRA meeting the National Institute of Justice Standard Type 1 classification for body armour.

This process entailed looking at organisms that use multiple layers in their shells and skin to create a strong protective layer, while maintaining flexibility. ADIRA’s design in particular takes inspiration from the diabolical ironclad beetle, striped bass and sea snails.

“When discovering how things work, a lot of the time you can rely on what nature did first. I feel like there is a missed opportunity a lot of times,” Martins adds.

Her design has attracted attention, with Martins, who graduated in spring 2021, receiving a notable student mention in the commercial equipment category at the Core77 Design Awards. Core77 is an online magazine focused on industrial design. Their yearly awards are an opportunity to celebrate innovation and creativity across 18 different design categories.

Now, Martins’ submission is a candidate in the Community Choice Prize for the Core77 Design Awards. The public can vote for ADIRA until July 27, 2022. 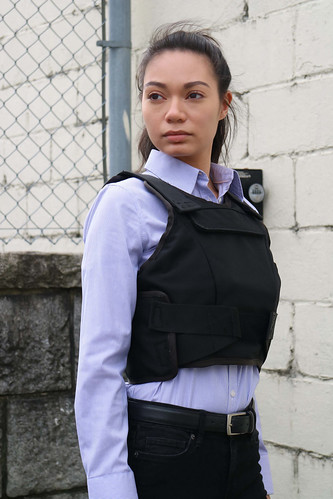