The Eagle Spirit Award is given to students who have contributed to KPU spirit or pride through a notable display of service, achievement, or excellence.

The recipients will be awarded $500 each and there are 5 awards presented annually. Nominators should be able to answer "yes" to the statements below for nominations that are submitted:

Candidates may be nominated by faculty, staff, or students.

“Othman and Maithem gathered a group of students to create the Middle Eastern students association within KPU to lift the Middle Eastern Spirit. They organized events and activities focused on this. They have also been orientation leaders who helped international student transition to KPU easily.” “Nubwa was one of the members of the Model United Nations team that came to the workshops. I was impressed with her initiative, skills and willingness to put in so much additional time and work.” “The KPU Marketing Association (KMA) is an association that currently has more than 400 general members with 7 executives members running the operations. The individuals above were nominated for their contributions to the association’s key achievements”

“Kari Michaels embodies all the positives of today's university student. She has a healthy sense of curiosity, justice, and she practices equality for all students and represents their rights to her fullest capacity.” “Brady is a shining light in study groups and around campuses where he is always willing to help out - whether it is with another student, staff, or faculty.  Brady is the type of student we want to cultivate at KPU who has had his struggles and continues to persist with studies and work with a willing heart.  He is a positive model in our student community...and a quiet achiever.”

Saed has been deeply involved in the Model United Nations program at KPU.  He's worked with the Faculty of Arts to turn the program into a course within the Political Science Department.  His passion and dedication for learning, growth and change is a model for any student at KPU.

When Saed sets his sights on something nothing will stop him. Not only is he involved in KMUN he is also working closely with staff at KPU to host the first KPU TED Talks. My university experience would not be the same without him. He is constantly making KPU a place where I want to be involved and have the university experience that I dreamt of. Saed is constantly striving to spread the word about KMUN not only at KPU but to the community at large. He was extremely successful at the 2013 Harvard World MUN and brought back a delegate award. At Harvard World MUN in Melbourne Australia he was consistently promoting KPU to other students. He is determined to bring change to the world and I am confident that he will achieve it someday.

Olivia has recently been nominated as Vice President of the Accounting Society of KPU (ASK), starting January 2014, because of her willingness to contribute and take initiative. Her role on the ASK includes supporting over 1500 accounting students by planning and organizing events. Aside from being on the ASK, KPU’s CPA Ambassador and working as a Student Assistant at the KPU Athletics Center, she is actively involved in the community. Some community involvement includes helping to raise over $10,000 at the August 2013 Grant Thornton Road Hockey Rumble by making a charity basket, assisting 408 cycling participants by preparing and handing out food and refreshments at an aid station at the July 2013 Propera GranFondo, serving coffee to over 200 people at the annual Breakfast with the Bank Fundraiser in April 2013, organizing for the annual KPU/Wiley Faculty PD Day by setting up for the workshop in Arpil 2013, helping raise over $1200 for the ALS Organization through organizing and facilitating a pub night for KPU Students in April 2013, and supporting The Walk for ALS by registering participants, collecting donations, and completing tax receipt forms in May 2013.

For more on the Accounting Society of KPU, visit their site at kwantlenaccounting.com

Stemming from a class discussion on poverty in Vancouver's Downtown Eastside, Puneet Rangi encouraged her instructor Tom Allen and co-students in her 'Crime, Criminal Justice and the Media' class to work together and give back to the community. She organized the Downtown Eastside Food Project during which she divided tasks between students, and convinced her professor to provide incentive to the skeptics. The food project was a great success, with sandwiches, cookies and other such goodies prepared in special lunch bags for those less fortunate (approximately 200 lunch bags made). This food project yielded great positive feedback from those who participated in the act of good will, and from those who appreciated the intricate care and consideration on behalf of the KPU Students. It served as an opportunity to be exposed to the reality of Vancouver’s Downtown Eastside, rather than relying on the depictions portrayed within the media. This food project served as a significant and relevant teaching for the class, and as an act of grace and giving for those in need.

Puneet Rangi, a 21-year old published author of an important and revealing contribution to knowledge and literature, "The Things I've left Unsaid" and BA Criminology student, is also a member of Acting-Together CURA project, a KPU based research project on the prevention of youth gang-violence. In participation, she aids in knowledge dissemination through conferences and forum presentations.

Puneet participated in the Nov 2013 1st Annual Research & Knowledge Mobilization Conference at KPU, the RCMP-Sikh Community Leadership Conference at the PRTC RCMP facility (June 2013) and at the KPU Conference Centre (July 2013), and the Chris Mohan Memorial Event (May 2012).

Puneet demonstrates strong leadership, passion and respect for KPU and its many initiatives. As an actively involved and ultimately engaged student, she is deserving of the Eagle Spirit Award. Andrew Blair became President of the Human Resource Management (HRMT) Student Club in August 2013, and since then has dramatically grown the club and infused new energy and structure.  He created job descriptions for all club positions, and created a club constitution which outlined policies and procedures for the club. This covered succession planning, disputes, recruitment, and budgeting. Once the constitution and job descriptions were completed, he began recruiting using social media sites like Facebook and Twitter. In an 8 week span he grew the amount of club volunteers from 6 to 30 and the total members from 85 to 162.  They held their first very successful event, an Interview workshop, in October, and had 8 HR professional lead roundtables to educate students on interviewing tips.  Over 75 students from all programs attended.

Recently, he applied for 4 HR Co-op positions, and was offered 3 jobs within a 24 hour period.  He has chosen to complete his first HR Co-op work term this Jan 2014 at Glentel, and was the successful candidate chosen from students at all Lower Mainland schools (UVIC, UBC, SFU).  This is the first time Glentel has hired a HR Co-op student and Andrew will do a fantastic job representing KPU. Captain of KPU men's soccer team, and outstanding athlete, Jake Starheim contributes regularly to KPU community by attending Eagles games and supporting fellow Eagles student-athletes. Jake is regularly seen cheering on KPU at home sporting events. It is rumoured that he sometimes dons the Kwinten Mascot suit, but this is unconfirmed.

Jake is a 4th-year student-athlete on our Men's Soccer Team. This year, Jake was co-captain of the squad and showed his ability to be a true leader in all aspects. He was an exceptional advocate on and off the field of play throughout the season and it was very apparent that the exceptionally young squad looked up to him for leadership and guidance with his experience as a varsity athlete and managing time commitments between school and athletics. 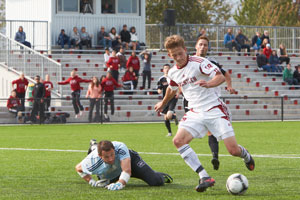 Lexy is the communications representative for the Accounting Society of KPU (ASK).  In her role on the executive team over the past two years, she has demonstrated a passion for ensuring fellow KPU students effectively brand themselves in order to secure positions in Vancouver's CA Firms.  She started a blog for students to give them tips to go through the very competitive recruitment process, and has mentored several students and enabled them to achieve positions during the past year's recruiting season.  She has significantly strengthened the reputation of our students at her firm, taking an active role at PWC in recruitment and being a supportive voice for KPU graduates at PWC.

Lexy has been highly involved in the club's recent initiative "KPU Accounting Gives Back", where accounting students have volunteered for several local charities to raise funds.  Lexy also took over the project of updating the ASK website to enable better connections with students.  She has done a phenomenal job managing the Twitter account, Instagram and Facebook pages for the Accounting Club to enhance the connectedness and strengthen the culture and reputation of the accounting students at KPU. “Over the past year I have seen Fatima demonstrate the type of exceptional leadership and service that I believe the Eagle Spirit Awards are intended to recognize.

Fatima came up with the idea of developing a workshop to provide supplementary assistance to students who wish to improve their writing. On her own initiative, she made contact with faculty members in a variety of disciplines and together they organized and delivered a workshop that began in the Fall 2012 semester that provided students with ideas for improving their written assignment work. The success of this initiative prompted a series which ran throughout the Spring 2013 semester. During my 10 years of teaching at KPU, I have observed very few students who demonstrate the level of leadership, initiative, and service to the student body that Fatima has shown.”

“Zerlinda Chau has contributed a lot of positive spirit around KPU. For example, she was the only Orientation Leader this year who volunteered at all three campus event days in addition to various training days and preparation activities prior to the events. She was consistently demonstrated an infectious, positive enthusiasm about serving new students and her teammates as well. Zerlinda also regularly contributed new ideas and took initiative in multiple ways as a group leader. Zerlinda is also currently serving as a volunteer for the 6th annual KPU Student Leadership Conference Planning Committee. Having been a part of last year's team, Zerlinda is this year a Co-Chair and Director of HR.

I am aware that Zerlinda also regularly contributes as a START Volunteer, an Activity Leader for the 100 Volunteers Challenge, Parent Orientation and Athlete Orientation.”

Nathan Printis, Jason Thompson, and Kevin O’Connor, all won medals this summer at the Skills Canada National Competition in Vancouver. Printis, a KPU Welding student and Vancouver resident, received a silver medal in the competition’s Welding category and adds to a gold medal he earned in the provincial competition held in April. He was tested in his skills area, welding, against his peers across the nation in a number of interactive Olympic-style, hands-on activities. Jason and Kevin, KPU Turf Management Diploma students, competed as a team to take bronze in the Landscape Gardening category. The two students add to the gold medal finish they secured at the provincial competition.