KPU and WellIn5 are partnering to develop a conceptual model for a mental wellness platform. The goal is to enable all users to quickly and seamlessly create their psychological profiles using AI driven algorithms, receive feedback and easily connect with healthcare professionals. The project consists of conceiving of a variety of data sources that could be used to construct a psychological profile, validate these data sources, and establish appropriate feedback that could be provided to users. This project could lead to products that transform how mental health is diagnosed and treated.

Industrial Collaboration, Honours Thesis (2020): Incidents and Contributing Factors at a Canadian Mine

This project examines safety and how it relates to other aspects of a mining company in BC. This investigation involves examining safety incidents in relation to such aspects as shift type, position in shift rotation, time off, specific trades and occupations, and weather. We employ Big Data techniques such as machine learning algorithms to tease out effects that are otherwise challenging to examine.

Industrial Collaboration (2020): "Implementation of computational intelligence algorithms for the automation of business workflow at BuildMapper"

BuildMapper is a Vancouver BC based technology start-up with the goal of delivering time sensitive residential construction data to consumers. BuildMapper obtains publicly available construction phase data from municipalities, repackages and transforms the data into usable formats and makes it available through a web application to users. The goal of the present Mitacs project is to automatize data acquisition and processing steps, which are currently labour intensive and consequently, slow and expensive. This project will enable BuildMapper to scale from its Vancouver base with 15 cities of data, to Canada-wide operations. The first step in this project is to architect a MySQL database that will be scalable and is optimized for performance. The second step is to map out URLs for construction phase data sources across the top 100 Canadian municipalities. This is a labour intensive and time-consuming process because each municipality website is expected to have its own idiosyncratic structure. The third and final step is to write a web crawler algorithm in Python that will periodically checks the URLs for updated data files and automatically download them to a server.

Project (2019): "Evaluation of electronic key card data from a high-rise building as a proxy for behavioural patterns of movement and transportation"

This study examines modes of transportation, in terms of driving compared to non-driving (including walking, cycling, and bussing), in an apartment building in Metro Vancouver, British Columbia. We used MySQL to analyze the data from the key card scans in the building over a two-year period with respect to the Main Door and Main Gate entrances. We found that people drive substantially more than other modes of transportation despite the more recent focus on the accessibility of sustainable transportation. 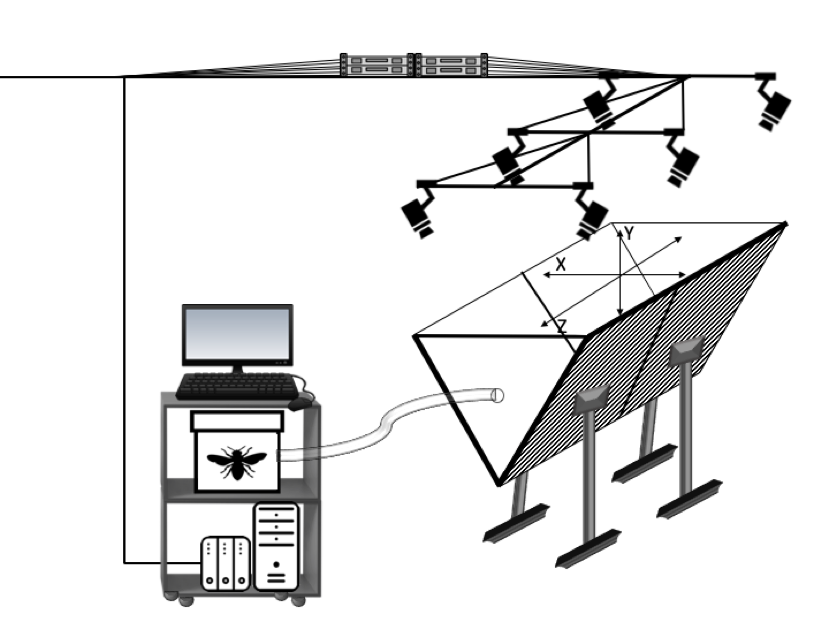 Many species of bees are ideal as animal models for the study of visual guidance and navigation related questions because of their convenient, lab-friendly life-cycle and very capable brains. Here, we report on our design of a new marker-based, high-throughput virtual reality system (for markerless systems, see Stowers et. al., 2017). The current system is open-loop, but all the necessary hardware components are present to operate as a closed-loop system through a software customization. The two components of the system are tracking and rendering. Tracking the 3D position of flying bees is accomplished with six OptiTrack Flex13 USB cameras, which compute bees’ positions with an 8.3 ms latency. Rendering is comprised of four 55-inch television displays (9.1 ms input lag), which are configured in a 2.44 m V-shaped tunnel. The system is driven by a computational server with a 3.6 GHz octa-core processor, which handles tracking, and rendering with a GeForce 1070 Ti high-performance video card that has four simultaneous outputs. The V-shape of the tunnel allows for the presentation of stimuli in both ventral and lateral visual fields. Virtual reality allows the rendering of arbitrary space configurations making it possible to, for example, have bees experience a rectangular tunnel. The key advantage of this system is that it increases experimental control while also increasing external validity, tracking is accomplished with very low latencies, and the system is very easy to set up. Data from our first project manipulating horizontal bars as in Dakin et al, (2016) will also be presented.

Bumblebees are social animals that use visual information about other bees to choose flowers (Leadbeater & Chittka, 2009). Workers prefer flowers that are occupied by another bee when the occupier is large relative to the flower, and when occupied flowers are relatively rare in the field compared to empty flowers (Plowright et. al., 2013). It is unclear whether this preference is due to workers viewing others as competitors, signalling a flower has been depleted of its food resources; informers, signalling the flowers that are abundant in food resources; or cheaters, looking to steal rewards from the occupier (Lihoreau, Pasquaretta & Heeb, 2016; Service & Plowright, 2002). Stress also influences food-finding behaviour and decision making in bumblebees and honeybees (Bateson, Desire, Gartside, & Wright, 2011; Perry, Baciadonna, & Chittka, 2016). It is not known whether the preference for occupied flowers, and therefore, social learning in general, is modulated by workers’ internal states; whether it be stress or an unexpected positive reward (Bateson et al., 2011; Perry et al., 2016). Here, we investigate reasons under which the preference for occupied flowers varies with the internal state of B. impatiens workers. To manipulate the workers’ internal state, we present workers with a droplet of 1 M rewarding sugar solution, or 1 mM aversive quinine solution prior to releasing the worker into a 12-arm radial arm maze. Data collection is ongoing, but currently, workers’ choice proportions do not significantly deviate from the expected values in both quinine (Gp = 0.80, p = 0.37, n = 9) and sugar (Gp = 0.66, p = 0.42, n = 7) conditions. There was a significant difference between preferences for occupied and empty flowers in sugar exposed workers (p  = 0.005, GP = 8.025, GH = -58.697). There was not a significant difference between preferences for occupied and empty flowers in quinine exposed workers (p = 0.130, GP = 2.297, GH = 298.054). These results suggest that quinine removes the preference for occupied seen in the sugar exposed workers and in previous research. There was not a significant difference between the corridor a worker was facing at the beginning of flight and the first choice (p = 0.231). This result suggests the first choice was dependent on the angle of departure, and the angle of departure was random because workers could not see the flowers before they began flying due to a lip blocking the view from the maze stage, as well as the partitions between the corridors.