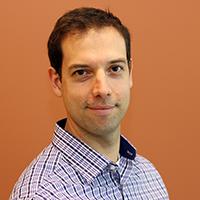 Dominic is passionate about the engineering and scientific aspects of the brewing process, and he strives to make sure that his teaching methods reflect that in order to pass that same passion along to his students. Brewers from around the world are always making new discoveries in their craft, and the constant innovation in the industry fuels Dominic’s enthusiasm, and his interest in the different ingredients brewers introduce into the brewing process in order to create new and exciting varieties of beers and recipes.

Over the past ten years, Dominic has worked in a number of different roles at breweries in BC, Quebec and Belgium, and he taught science at the high school level before joining the Brewing & Brewing Operations program at KPU. His prior experience in education and brewing allows him to put the course material into relatable and practical context, which he believes makes a big difference for students. Dominic combines direct instruction with hands-on learning that fosters critical thinking and cultivates an understanding of the course material that helps students become well-rounded brewers.

Dominic has a Master of Science in Brewing and Distilling that he obtained with distinction from Heriot Watt University in Scotland, and has completed the Professional Development Program (PDP) at SFU. He is also a member of the Master Brewers Association of the Americas.

Though his taste in beer varies with the setting, he usually prefers Belgian beers.