KPU historian unearths the history of punk in Vancouver

KPU historian unearths the history of punk in Vancouver 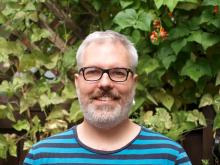 Dr. Eryk Martin proves it’s anything but by bringing his research into drug culture, punk and heavy metal, and feminist science fiction into the classroom at Kwantlen Polytechnic University (KPU).

Comic books and Cold War action flicks are all part of Martin’s arsenal in the history of Canada, gender and race, and activism courses he teaches at KPU’s Richmond campus.

“Punk is a global phenomenon, and a crucial part of 20th century popular culture,” said Martin. “It's also been an important forum for political communication and community activism. Although we might tend to think about punk through places such as New York or London, Vancouver has been a crucial setting for punk's musical and political development since the very beginning of its existence.”

A self-described settler born and raised in Nuu-chah-nulth and Coast Salish territories (from Sooke, B.C), Martin’s revolutionary research isn’t going unrecognized. Martin was named a Wilson Institute for Canadian History Associate for 2017-2020 for pushing the field of Canadian history in exciting new directions and bringing fresh perspectives to the writing of Canadian history.

“As a historian who is early in their career, it is a wonderful opportunity to be chosen as an associate with the Wilson Institute,” said Martin. “One of the really exciting things about this collection of academics is that their work pushes the boundaries of Canadian history out into the wider world. This is what I've tried to do with my research on the political history of punk in Vancouver.

In addition, Martin is currently writing a book on political activism in Vancouver during the 1970s and 1980s entitled Black Flags Rising: Anarchism, Activism, and the Vancouver Five, 1967-1984.

"This is great news for Eryk. These honours are rare and invariably deserved,” said Dr. Diane Purvey, dean of the arts faculty. “We're so lucky to have Eryk as part of the KPU community. His work reminds us of the importance of the humanities and the arts generally. His research into the history of 20th century activism and musical subcultures is timely and relevant and the sort of thing that energizes students in and outside the classroom.”