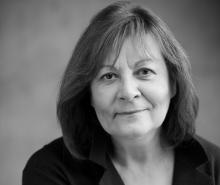 The former president of Arts Umbrella will receive an honorary degree from Kwantlen Polytechnic University (KPU) to recognize her work in education, arts and culture.

Lucille Pacey, who served as chief executive as well as president of the Canadian arts education organization, had a particularly strong impact in Surrey, B.C., where she helped establish two Arts Umbrella facilities.

“Lucille Pacey’s dedication to fostering the arts in communities and advancing post-secondary education is inspirational,” says Dr. Alan Davis, president and vice-chancellor, KPU. “That passion and dedication is why KPU is proud to present her with an Honorary Degree to celebrate her achievements.”

For 30 years, Pacey helped grow the arts at several high-profile educational institutions. Starting with a degree in textiles with a goal to invent new fabrics, she began teaching at Grant MacEwan Community College (now MacEwan University) in Edmonton.

“When I was young, I always said I would never ever become a teacher, but I had teaching children in mind. To my surprise, I found that I liked teaching adults in a post-secondary institution.”

Pacey moved to British Columbia for a teaching opportunity at Camosun College and an administrative post at the University of Victoria. She later became an executive member of the Open Learning Agency responsible for the Knowledge Network.

Pacey subsequently acted as a consultant to a Paris-based international trade show company. In that work, she travelled the world organizing trade shows in technology and education. That’s when her journey with Arts Umbrella started.

“All this time I was not intending, not even looking at the position. I just felt like I was giving them good sound advice.”

The job as president was hers. While she never wanted to teach younger people, that’s exactly where her career took her.

“The most rewarding thing about being at Arts Umbrella was seeing this incredible sense of openness and willingness to learn and excitement in learning and just a fresh approach to how people can learn.”

Pacey helped establish two Arts Umbrella facilities in Surrey – one in Morgan Crossing and one in North Surrey – before moving on from the organization. She now volunteers for various organizations.

When Pacey receives her award on October 9, she hopes graduates take away one message she learned from someone when she needed advice:

“There are many doors that open for us and we just need the courage to step through them and take advantage of the opportunity that’s on the other side of that door.”