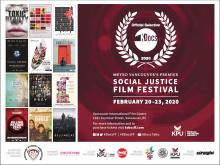 The Kwantlen Polytechnic University-organized festival will screen 13 films, including eight Canadian features and a Canadian short, over four days in February. This year the theme is Truth in a Post-truth World.

Morris says the theme is borrowed from the sub-title of one of the closing night films, Bellingcat: Truth in a Post-Truth World.

Other films cover topics such as:

Opening night will feature a Q&A talk with environmental activist David Suzuki. Other special guests at the festival include Kwantlen Nation Elder Lekeyten, Canadian Senator Kim Pate, Vancouver politician and housing activist Jean Swanson, international speaker Ellen Woodsworth, the Pooni sisters (the subject of one of the documentaries) and many more. The festival will also have over 30 exhibitors.

The festival runs February 20 – 23, 2020, at the Vancity Theatre in Downtown Vancouver. Tickets are now on sale. For more information visit kdocsff.com.