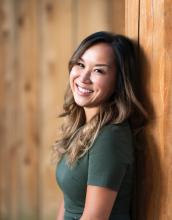 After learning her craft at Kwantlen Polytechnic University, journalist Andrea Woo has reported on some of the most important issues in Canada in recent years. Now the award-winning journalist is set to receive another accolade at KPU’s fall convocation - the Distinguished Alumni Award.

“I'm incredibly grateful for this acknowledgment from my alma mater,” says Woo. “It also served as a lovely reminder of how I got my start and the very first days of what would eventually become a dream career.

Woo was 17 when she started at KPU in the journalism program. She says she didn’t know what she wanted to do other than something that involved writing.

“It was KPU that taught me what journalism was, what it could do, and that there was a space in it for me. I learned not just journalism basics but critical thinking and analysis, all while being supported by warm and friendly instructors who were generous with their time.”

In 2003, while she was writing for KPU’s former student newspaper, the Chronicle, she wrote a story on the opening of North America’s first legal supervised injection site, Insite.

“People sat with me on the stoop, telling me about their lives. Some of their stories were heartbreaking,” says Woo. “I remember being fascinated with everything that I learned that day and feeling excited to put that story together.”

Today, Woo has won several journalism awards and is known for her reporting on Canada’s fentanyl crisis, which won her a 2017 Canadian Association of Journalists award. As a reporter for the Globe and Mail, she focuses mainly on substance abuse, mental health, and drug policy.

Woo graduated from KPU in 2006 with a Bachelor of Arts in Applied Journalism. She went on to write for Canadian and American music publications about hip-hop. In 2012, she was hired by the Globe and Mail.

“It's been a wild ride I never would have expected. I've interviewed some of my favourite musical artists, flown around the U.S. to piece together the story of one man's life, learned to ice fish and saw the northern lights for the first time while in the Northwest Territories while on an assignment,” says Woo.

“I've covered murders and mass shootings. Covered the drought in California. I've learned extensively about substance use and drug policy from years of interviews with people who have devoted their entire careers to those issues. And now I'm reporting about health during a global pandemic. Journalism can be fun and exciting but, most importantly, I've found meaning in my work.”

“Andrea is an extremely talented journalist. She’s an exceptional reporter, not only in her ability to dig through the material but in her ability to relate to people from all walks of life and to get them to trust her enough to share their stories,” she says.

“Where I think she’s really excelled is in her use of social media; she takes her stories to her readers, interacting with them live when news breaks. Because of that, she’s one of the most important journalists in Vancouver to follow on social media.”

Woo will receive the Distinguished Alumni Award, which is an initiative by the KPU Alumni Association, at the virtual convocation ceremony on October 20.

“Andrea Woo has made KPU proud as she started her amazing journey into the world of journalism here,” says Dr. Alan Davis, KPU president and vice-chancellor. “We are honoured to present her with the Distinguished Alumni Award.”