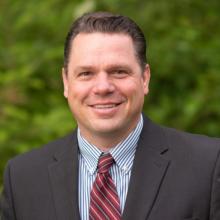 Randall Heidt has been appointed to the position of vice president, External Affairs, at Kwantlen Polytechnic University. Heidt will begin this role immediately, replacing Marlyn Graziano, who retires from KPU on July 16. He will also work closely with the KPU Foundation Board in advance of also taking on the role of chief executive officer of the KPU Foundation.

Heidt was most recently vice president, Strategic Initiatives, at North Island College (NIC), where he was responsible for Marketing and Communications, the Office of Advancement, Business Development, and the Centre for Applied Research, Technology and Innovation, along with Indigenous, Government and Community Relations. He also served as executive director of the North Island College Foundation.

Prior to NIC, Heidt served as executive director, External Relations, at the College of New Caledonia.

Previously, he was city editor of the Prince George Citizen daily newspaper. Under his leadership, the newsroom won the Michener Award for Meritorious Public Service in Journalism – one of Canada’s highest journalism honours.

"I am so excited to be joining the talented and dedicated team at KPU," says Heidt. "It's such an amazing institution and I am really looking forward to supporting more students than I have ever been able to help before."

“We are excited to welcome Randall to KPU,” says Alan Davis, KPU president and vice chancellor.

“With his breadth of experience in community, media and public relations, and in Advancement, he will be a great asset to KPU’s future and to that of the KPU Foundation.”

Heidt holds a Master of Arts in Leadership from Royal Roads University, a Bachelor of Applied Communications from Mount Royal University and a Professional Fundraising Certificate from Boston University. He is a Certified Fund Raising Executive, and belongs to the Association of Fundraising Professionals.

He has also been an active community member, serving on a number of boards, including the Spirit of the North Healthcare Foundation, Chambers of Commerce in Comox Valley, Campbell River and Prince George and the Innovation Island Technology Association.  He has also served as a Special Olympics Coach.

Heidt will be moving to the Lower Mainland this fall.  In the meantime, he will begin his work remotely and looks forward to connecting with his new colleagues at KPU as well as partners in the region.