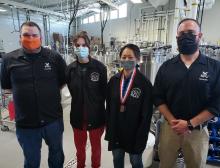 The brewing and brewery operations program at Kwantlen Polytechnic University (KPU) has tied for second place overall in the top brewing schools in North America.

Competing against 11 other colleges and universities from Canada and the United States, KPU won gold in the American Amber/Red Ale category for Birra Rossa, brewed by then first-year students Michael Hodgson, Peter Bartnik and Donghwan Chang.

“Seeing our students pour their passion into their brewing and receive this recognition on an international level from the U.S. Open College Beer Championship is incredibly rewarding,” says Dr. Betty Worobec, dean of the Faculty of Science and Horticulture. “It really showcases the skill and talent these new brewers have earned in the program and is a tribute to the dedication of their instructors.”

Alex Paul, a recent KPU brewing grad now working at Mariner Brewing in Coquitlam said their team was “blown away” to win a medal for their signature recipe beer, Noble Steed.

“This was our capstone brewing project, so Rebecca, Emily and I were fully responsible for creating the recipe, brewing, analysis and quality control, as well as being involved with marketing and sales of our beer,” says Paul. “It’s so cool that it won an award and we really appreciate all the amazing support of our instructors to help us get to where we are.”

The U.S. Open College Beer Championship is the only competition exclusively for post-secondary institutions that have brewing and fermentation programs and is meant to showcase the best future brewers in North America. A major difference this year from previous USOCBCs is that beer entries were evaluated according to the U.S. Open Style Standards with 132 categories, instead of the previous five. Schools were allowed to submit up to five entries across all categories per institution.

Learn more about KPU’s diploma in brewing and brewery operations and the US Open College Beer Championships.