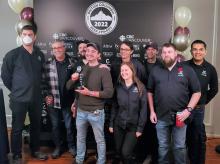 A KPU collaboration beer won a second-place prize, and over two dozen KPU alumni – now employed at breweries across B.C. – contributed to award wins at the 11th annual event, held Nov. 5 at the Croatian Cultural Centre in Vancouver.

“This win at the B.C. Beer Awards is confirmation of the tremendous work that our brewing students and instructors are doing. The growth and success of our students and alumni is impressive and we’re incredibly proud of their achievements,” says Brett Favaro, dean of the Faculty of Science and Horticulture.

Earning the second-place prize in the “Malty UK and Irish Ale” category was the student and alumni collaboration beer Overcast Brown Ale. The category had 24 entries from B.C. breweries. Initially brewed as a student project by Kyle Jansen and Kayla Gibson, Jansen returned to KPU over the summer to recreate Overcast with instructors Martina Solano Bielen and Emily Kokonas.

"Winning this award is unbelievably exciting,” says Jansen, who graduated from the KPU brewing and brewery operations program this year and is now a brewer at Five Roads Brewing in Langley.

“Overcast started out conceptually as a porter, however, due to some changes with the grain, my brewing partner Kayla and I decided to change the style completely and create a brown ale. Learning how to shift gears and design a recipe when you have different ingredients is something we learned how to do to in the program. Rebrewing Overcast this summer with some of the instructors was an opportunity to tweak the recipe again and it became a winner.”

The B.C. Beer Awards received 1,000 entries from 120 breweries across B.C. that entered into 31 beer categories. Over 93 awards were handed out. This year’s event featured 44 judges, of which a record-high 10 were female judges, including KPU brewing instructors Solano Bielen and Kokonas.

KPU’s success at the B.C. Beer Awards follows national recognition at the 2022 Canadian Brewing Awards and the inaugural Canada Beer Cup in October. The KPU Brew Lab in Langley is open to the public on Fridays from 1 to 6 p.m. for sales of student-brewed beers.