Crosswalks, pillars and staircases at KPU get a rainbow makeover for Pride

Crosswalks, pillars and staircases at KPU get a rainbow makeover for Pride

Pride 2021 is getting brighter at all Kwantlen Polytechnic University campuses.

Progress Pride flags or colours are being painted on crosswalks at the Langley and Surrey campuses, a staircase at the Richmond campus, pillars at Civic Plaza and a pathway at KPU Tech in Cloverdale. The work will take place this summer, starting at the Civic Plaza campus in Surrey, where the eleven Progress Pride colours were painted on pillars above and below the KPU sign last week.

“These pillars, crosswalks, pathways, and staircases represent a public commitment by KPU to diversity and inclusion, to creating a safe, welcoming and supportive environment where 2SLGBTQ+ folx and people of all genders and sexualities feel they belong and are respected,” says Shalini Vanan, Pride Advocacy Group (PAG) co-chair and manager of Sport, Recreation and Health Promotion at KPU.

“Painting concrete doesn't in itself achieve this environment, but it sets up an expectation and a promise, a pledge, an invitation and an obligation to do the work we need to do to make it a reality,” adds Romy Kozak, also PAG co-chair, and director of diversity at KPU.

They add that while Pride is a large public celebration of diversity and inclusion, it is important to remember its political roots in rebellion and protest by marginalized people, including trans women of colour, who were shamed, silenced, and reviled for being who they are and loving who they love.

The goal of better representing and serving all 2SLGBTQ+ people is reflected in the choice of the Progress Pride flag design, which Daniel Quasar created by adding a chevron of black, brown, light blue, light pink and white to the six rainbow stripes of Gilbert Baker’s LGBTQ flag. Quasar included this arrow shape to acknowledge the forward movement that has already occurred, and the progress still to be made to fully welcome and support trans and non-binary individuals, people marginalized because of race or colour, as well as those living with, and lost to, AIDS.

“There has been significant progress over the past few decades but what has also become more evident are the huge gaps and inequities that persist among 2SLGBTQ+ people, as in our society in general, due to factors such as race, gender, disability, socio-economic background, religion, and nationality—that is, still just for people being who they are,” says Kozak.

“Pride for me is a time to renew and re-energize our commitment to the struggle for real equality for everyone, especially those who are still being beaten down and living in the shadows,” adds Vanan.

The Pride Advocacy Group at KPU has also established a student award that will be presented to an individual who self-identifies and has shown commitment to 2SLGBTQ+ activism at KPU or in their own communities. Donations are still being accepted for this award.

KPU is also working to offer more trans- and non-binary friendly documentation processes for students and is moving towards making gender-neutral washrooms more accessible on campuses.

KPU is participating in the Vancouver Pride Parade on August 1. During Thrive Month in October, when KPU focuses on promoting health and wellness, there will be events that include awareness workshops and engagement sessions with the Pride Advocacy Group. Also in October, in partnership with KDocs, KPU Asian Studies and Sher Vancouver, and with funding from the President's Diversity and Equity Committee (PDEC), there will be a screening of Alex Sangha’s new film Emergence: Out of the Shadows.

Learn more about Pride at KPU. 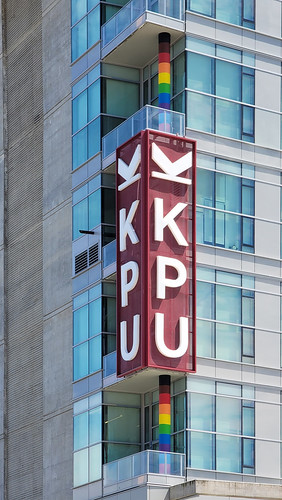