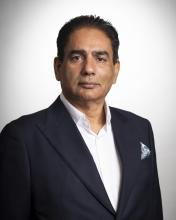 In the 35 years since graduating from Kwantlen Polytechnic University, Balraj Mann has successfully assembled a construction management empire as he acquired companies and expanded to other countries. Now he is set to acquire another accolade at KPU’s fall convocation – the Distinguished Alumni Award.

“I am humbled to receive this award. Getting the award means a lot to me and it also gives me validation about what I have done – even though I don’t think I have done much,” says Mann.

Mann arrived from India in 1980 as 15-year-old who “didn’t know much.” Living in New Westminster, he started at Douglas College, taking a two-year construction management diploma, but found permanent work difficult to come by during a recession.

“It was a repeat of my previous program of construction management from Douglas, but with KPU there was a small class size – only eight of us.”

Mann relished the small class sizes because it gave him the opportunity to form deeper personal connections with his professors and peers.

“You got to know your fellow students, not only from the civil and structural engineering program but from other programs too. The professors and the dean, were all in the same building. You get to know people personally and that was the biggest thing,” adds Mann.

“I remember my first co-op term was in the City of Surrey engineering department and that gave me exposure to how city hall works and working with professionals. Later on, when I started my own development and construction business, having that knowledge base was so helpful.”

Mann graduated from KPU in 1986 and moved to Toronto to find work.

“A year or so later I came back and I called one of my KPU instructors and told him what I was doing in Toronto,” he says. “He said there are similar companies in Vancouver, so he put in a good word for me and I got my first job through his reference.”

Today, Mann is chief executive officer and chairman of BM Group, a diverse portfolio of development, construction and real-estate related businesses with offices in Canada, the United States and India.

Even after taking his business to international levels, Mann remains a stalwart of his community. Mann recognized the importance of KPU’s local connection to the City of Surrey at the time of his co-op and launched himself into philanthropy. He now serves as vice chair of the KPU Foundation Board, while also serving as director of the Langley Memorial Hospital Foundation and the Surrey Board of Trade.

“At KPU, we say that our alumni are everywhere, doing great things,” says Graziano. “This is certainly true of Balraj, who has tremendous impact internationally as the leader of a global group of companies. He is also a respected leader locally in the Lower Mainland, where his company is helping to shape the future of our local economy, while supporting various community-focused charities.

“Balraj is quick to tell people that he is a KPU alumnus. He is proud of his alma mater, and in sharing that pride, he helps to enhance the university’s reputation in our communities.”

Mann will receive the award at KPU’s virtual fall convocation on October 6.

“Balraj Mann has been an excellent ambassador for KPU, starting his business career here while working selflessly to give back to our region and beyond,” says Dr. Alan Davis, KPU president and vice chancellor. “We are honoured to present him with the Distinguished Alumni Award.”