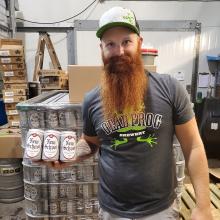 Graduates of Kwantlen Polytechnic University’s brewing and brewery operations diploma program have joined with Dead Frog Brewery and the BC Craft Brewer’s Guild to launch a new beer to kick off BC Craft Beer Month.

Sales of the new beer, called the New School Dry-Hopped Märzen, will benefit the BC Hospitality Foundation and the Nancy More Award, which supports women or underrepresented students at KPU pursue a career in the craft brewing industry.

“It was pretty meaningful to be able to come together with fellow alumni for this collaboration, especially since the pandemic we haven’t really had a chance to get together,” says KPU Brewing alumna Ashley Brooks, quality control manager at Four Winds Brewing Co. “Plus, it felt good doing this for a great cause.”

“Our goal is to make this industry a place where there is a beer for everyone and everyone who wants to work in brewing has an opportunity, and can thrive and be as successful as they want to be,” says KPU brewing instructor Nancy More.

“We have graduates in pretty much every province in Canada, so I’m thrilled if my legacy includes contributing to the education of brewers and great beer across the country.”

The New School Dry-Hopped Märzen is a crisp copper lager with a rich malt base and fresh burst of citrus from Mandarina Bavaria hops. It is available in select BC Government liquor stores across the province for the month of October or until quantities run out.