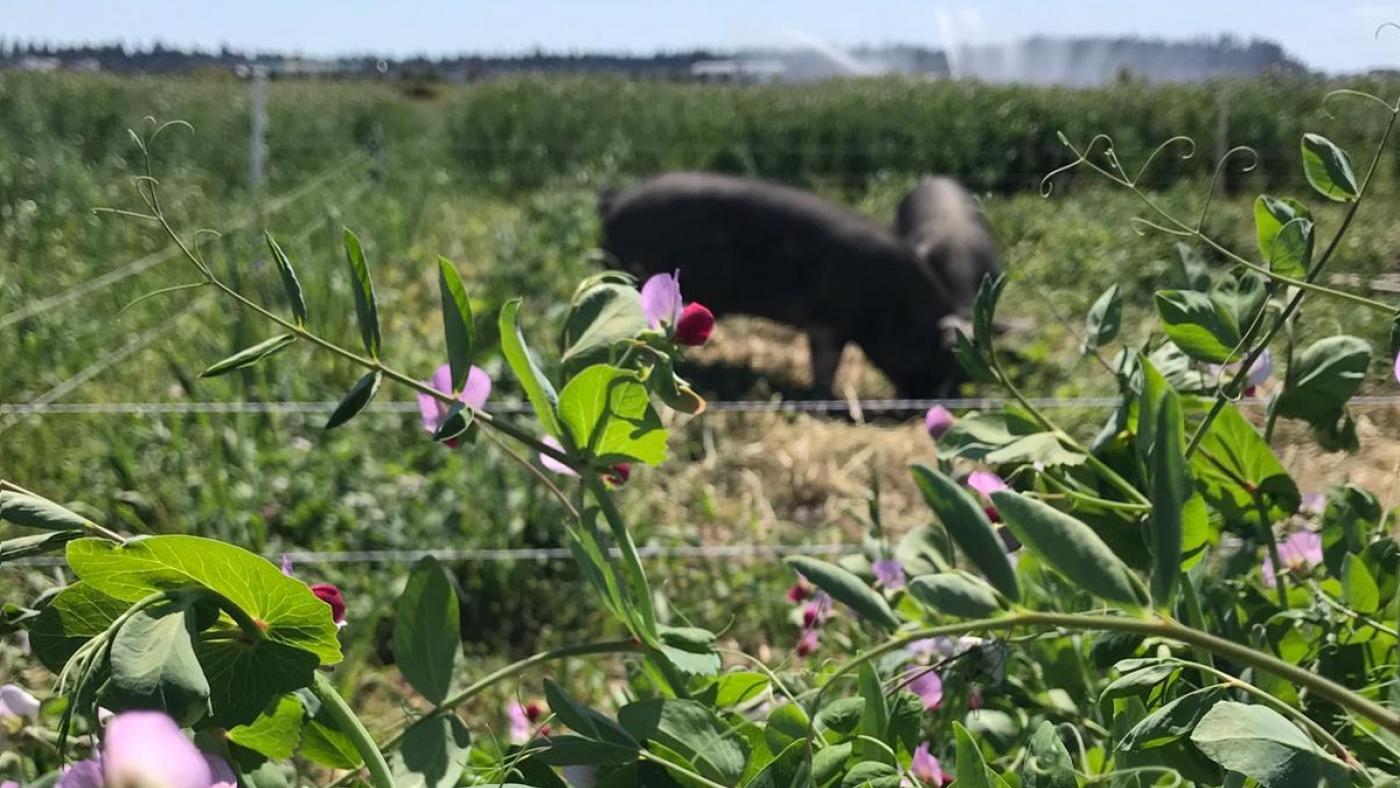 What is the project about?

ISFS is in the midst of an exciting production research project entitled “Integrating hogs in a cover-vegetable rotation for healthy soils & humans “This effort began in the spring of 2018 and we are several years into the study. The main thrust of this project is to determine the potential benefits for small scale farmers from integration of hog and vegetable production.  Most market crop farmers routinely put part of their total growing acreage into cover crops for a season, as part of their crop rotation plan. A common management practice is to sow, grow and turn under the cover crop in these "resting" fields up to 3 times per year (spring, summer and fall). This practice is aimed at adding soil organic matter (SOM), enhancing fertility and controlling weeds and diseases. However, the practice of tilling these cover crops back into the soil to terminate growth also negatively impacts soil structure and biological activity while contributing to soil compaction, generating greenhouse gas emissions and increasing the potential for soil erosion. These effects are exacerbated in clay textured soils such as those present in the Fraser Delta in British Columbia. Additionally, this management method requires machinery and implements not necessarily available to smaller scale and start up market crop farmers, many of whom we at ISFS work to support.

Years of informal experimentation on our teaching and research farm, as well as from numerous exchanges with farmers actively practicing Integrated Crop Livestock Systems farming (ICLS) has convinced us of the merits of using hogs as part of a sustainable crop rotation, nutrient cycling and land management system for market crop farming. When managed well, an integrated hog and crop system can reduce labour and revitalize neglected and diminished fields rapidly, getting them into a productive state while eliminating the need for expensive machinery, hence making this a particularly viable option for new entrant and smaller scale farmers. This, through the integration of hog grazing to terminate cover crops, this research seeks to find regenerative ways to manage cover crops and on-farm fertility while reducing reliance on the extensive use of tractor tillage has important environmental and climate change ramifications, small scale farm start-up and ongoing economic implications.

This research lies at the interface between applied scientific investigation and technical knowledge generation. It is also novel as it attempts to bridge segregated domains of agriculture, environmental health and climate change, indigenous food sovereignty, soil science, food systems, and human health and nutrition under one holistic approach.

The first season of field research has come to a close. Following intensive soil sampling in the spring a cover crop was established and the hogs were moved into their grazing plots. They moved through without issue and the incorporation of cover crop into the grazing units worked flawlessly. After the first rotation the summer cover crop was established, and hogs began working their way back through the plots. In September, the fall cover crop was spread in the tilled plots and in the grazing plots following behind the hogs as they moved through the plots for a second time.

September 26, 2019 -  The hogs finished their final rotation and were removed from the research plots.

We have a successful cover crop stant of fall rye and vetch moving into winter, that is currently overwintering. It has served as good forage for the migrating geese moving through the area. Soil sampling will commence on all plots in the spring when water content of the soil has reduced. Field edges were left marked to facilitate vegetable trials next year.

In our research vegetable field (the hog field in 2018), poor germination and a weed infestation led to minimal chances for useful sampling. Due to uneven treatments being applied, we wrote off attempting a second crop. Corn and carrots were harvested for sale by the TFN Farm School after the plots were deemed not useful for data collection. The fields were returned to cover crop after the experiment ended.

This summer is the second year of grazing hogs at the TFN Farm School. This spring we seeded a pasture into summer spring cover (peas, clover and oats) and the pigs are now happliy in their research plots. We move them to the next plot approximately every week. Pigs are moved when most of the cover crop had been uprooted and laid on the ground but before hogs could begin cratering. Best management practices are to move hogs when no more than 20% round was visible or devoid of cover. This usually corresponded with 5-12 days depending on cover crop growth stage, weather and soil moistures.

July 27, 2020 - We mowed and tilled those plots that are receiving the conventional tillage treatment and planted the summer cover.

The field that was in pasture last year (for pigs and tillage treatment) was planted in corn and winter squash this spring, following rigorous soil sampling from all plots for physical attributes included aggregate stability, bulk density, penetration resistance, volumetric water content and texture; chemical attributes included nitrate and ammonium and electrical conductivity, and; biological attributes included active carbon and soil respiration. The corn is now in growth stage v8 and is about 4.5 ft tall.

The second season of field research has come to a close. In September, the fall cover crop was spread in the tilled plots and in the grazing plots following behind the hogs as they moved through the plots for a second time. Once the hogs had been moved through all the grazing plots, they were taken off of the research fields and returned to the main herd. The movable houses and barrel waters were removed with the electri fencing, however, all posts remained in the ground to ensure accurate sampling for next season's vegetable crops. We have a successful cover crop stand moving into winter, that is currently overwintering. It has served as good forage for the migrating geese moving though the area. Soil sampling will commence on all plots in the spring, when water content of the soil has reduced.

Don't forget to subscribe to the ISFS YouTube channel to stay up to date with all our research activities!