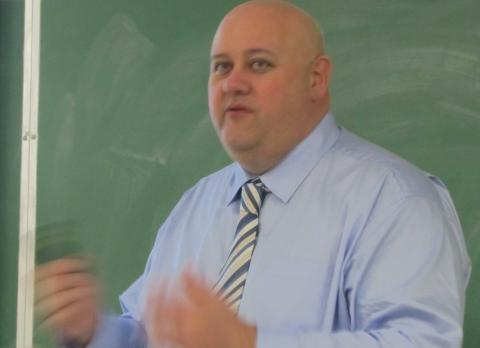 Keiron has worked within the criminal justice system for the last 26 years in a front line capacity.  The practitioner experience combined with the pursuit of life long academic learning situates him for teaching at a polytechnic such as Kwantlen.  Keiron has held faculty status at the Justice Institute of British Columbia, Douglas College, Royal Roads University and the Native Education Centre.   Keiron has been teaching at Kwantlen for over ten years in the Public Safety Communications Program, and the last several years in the Faculty of Arts-Criminology.

Keiron is a Doctorate candidate at London Metropolitan University at the John Grieve Center for Excellence in Policing.  His Doctoral Thesis is on Gang in British Columbia where he conducted qualitative research with almost 250 hours of field observations in Chicago, Toronto, Hobbema, Los Angeles and London, England.

Keiron was awarded the Frederick Thrasher Award for Excellence in Gang Scholarship, Leadership and Enforcement in 2014 at the National Gang Centre in Chicago, Illinois.

Interested in policing, police leadership and accountability, gangs, organized crime, community safety and security, diversity in criminal justice and the application of the law.