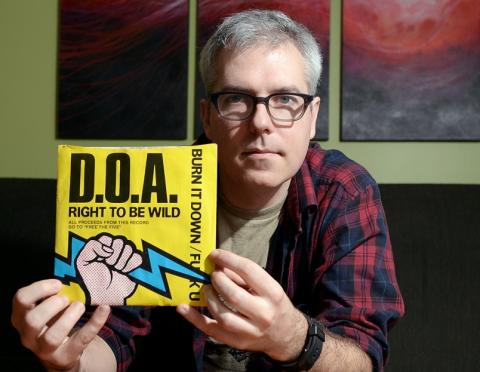 A settler born and raised in Nuu-chah-nulth and Coast Salish territories, Dr. Martin received his PhD from Simon Fraser University in 2016. At present, he's working on a history of anarchist activism in Vancouver. This book manuscript, Black Flags Rising: Anarchism, Activism, and the Vancouver Five, 1967-1984, focuses on anarchist political projects in order to explore the transformation of revolutionary politics and culture in the late twentieth century, both in Canada and abroad.  This research is nested within his broader interest in the popular and political culture of the 1960s, 1970s and 1980s, including drug culture, punk and heavy metal, feminist science fiction, and Cold War action movies. Dr. Martin brings these, and other media (including comic books) into his teaching at KPU, where he teaches courses on the history of Canada, gender and race, and activism.

“Feminism, Pornography, and the Political Utility of Emotion” in Lara Campbell, Catherine Gidney, and Michael Dawson ed., Second Wave Feminism and the History of Emotions (in progress)
“The Blurred Boundaries of Anarchism and Punk in Vancouver, 1970–1983,” Labour/Le Travail 75 (Spring 2015): 9–41.
“Canadian Communists and the Politics of Nature in British Columbia, 1937–1956,” Twentieth Century Communism 5 (Summer 2013): 104–125.
“A Look Back at Anarchist History: Burnaby’s Eryk Martin on Anarchism, Feminism and the Red Hot Video Bombings,” Burnaby Now (Winter 2015).
“Recalling 1980s Vancouver: When Radical Activists Took Up Arms,” The Tyee (Fall 2016).